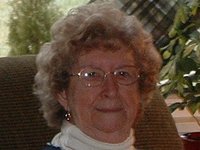 MACDONALD, Barbara Rose (nee Luton)
Barb was called to the big kitchen in the sky on the 14th of September 2019 in her 93rd year. Wherever she is we are positive that she is informing the powers that be that it hasn't been run correctly but that will be sorted in short order. She will be fondly remembered as a caring and giving individual and for her many contributions to the Town and the Legion in particular. Barb is again with her husband William (Bill) Yetman and letting him and Les Murphy know in no uncertain terms that the "party is over".

Barb is survived by her son Luton Jay MacDonald, daughter-in-law Laurie Ann Bauer her brother George Luton (Verna) of Brantford and many nieces and nephews in Canada and the United States.

Barbs final arrangements have been entrusted to Thompson Waters Funeral Home, 102 First Avenue in Port Dover. Visitation will be from 7-9pm Thursday the 19th of September 2019, preceded by a  RCL Br. #158 memorial service at 6:30pm. Funeral Service will take place at 11am Friday the 20th of September 2019 at Grace United Church, Port Dover, Ontario. Officiated by Rev. Kathryn Vance. Interment Port Dover Cemetery. A big thank you to all the staff at Dover Cliffs LTC, for their compassionate care of Barb. For those wishing, donations to the Heart and Stroke Foundation would be greatly appreciated. Online donations and or condolences can be made at www.thompsonwatersfuneralhome.ca