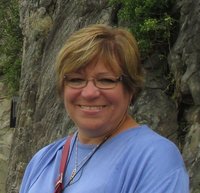 BOOTH, Christine (nee Pinchin) of Port Dover, passed away at Norfolk General Hospital on Friday, January 31, 2020 in her 63rd year. Beloved wife and best friend of John. Cherished sister and sister-in-law of Stuart and Sheila Pinchin of Kingston, Elizabeth Pinchin of Kelowna and Mibsie Booth of London. Will be sadly missed by her much loved niece and nephews, Ian, Ben, Kate, James and Tim, as well as cousins and friends. Christine had a special place in her heart for her furry kids, Squeak and Roxanne. Predeceased by her parents Robert and Marjorie Pinchin (nee McClelland), Christine was born in Toronto, grew up in Hamilton and worked for the Bank of Montreal in Toronto for 29 years, most recently as Project Manager, prior to her retirement. Christine and John made their way to Port Dover four years ago. Even though she only lived here for a short time she enjoyed the many close friendships that quickly developed and loved Port Dover as much as any Doverite. Christine was involved in the community in many areas and volunteered her time for several local organizations. She enjoyed travel, watching sports and was an avid tennis, curling, Leafs and Jays fan. Her cross-stitch talents led to the creation of many beautiful pieces. In keeping with Christine's wishes, cremation has taken place and a Celebration of Life will be held at a later date at THOMPSON WATERS FUNERAL HOME, 102 First Ave., Port Dover, ON 519-583-1530. For those wishing, donations may be made to Diabetes Canada or the Canadian Cancer Society. On-line donations and/or condolences may be made at www.thompsonwatersfuneralhome.ca