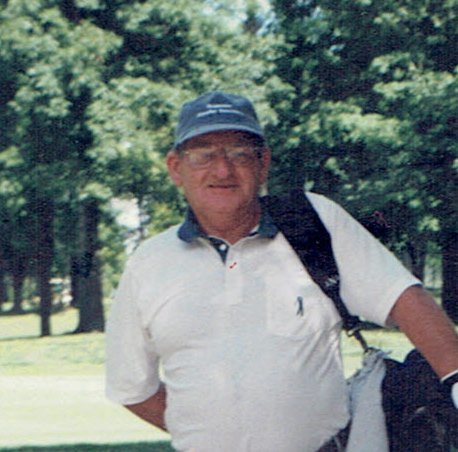 DRAKER, John "Jack" of Port Dover passed quietly amongst his family, on Friday, August 9, 2019 in his 82nd year. Cherished husband of Janet. Dearly loved father and father-in-law of Scott of B.C. and Marianne and John Russell of Waterloo. Loving grandfather of Alannah and Cory Annable and Stephen Russell. Dear brother and brother-in-law of Norman and Lil Draker of Burlington, Roberta Pokoradi of Dundas, Muriel and Fred Palermo of Burlington, John and Joan Richardson of Owen Sound, Marion Richardson of Hamilton, and Hugh and Darleen Richardson of Hamilton. Predeceased by his parents, Albert and Nellie Draker, brothers-in-law John Pokoradi and William Richardson and his wife Sandra. Jack retired from Stelco after 36 years of service, he worked at Hilton Works and Lake Erie. He loved spending time golfing in the summer and curling in the winter. He was a member of The Green's at Renton Golf Course and the Simcoe Curling Club. Jack was well respected for his easy nature and his ability to connect with people. He was a mentor to many and guided numerous people with challenges in their lives. Jack will be missed by all who knew him. Friends are invited to meet with the family to share their memories of Jack at THOMPSON WATERS FUNERAL HOME, 102 First Ave., Port Dover (519)-583-1530 on Saturday, August 17, 2019 from 11 am to 1 pm, followed by the service in the funeral home Chapel at 1 pm. Inurnment at a later date at Port Dover Cemetery. For those wishing, donations to the Juravinski Cancer Centre would be greatly appreciated. On-line donations and/or condolences can be made at www.thompsonwatersfuneralhome.ca

Share Your Memory of
Jack
Upload Your Memory View All Memories
Be the first to upload a memory!