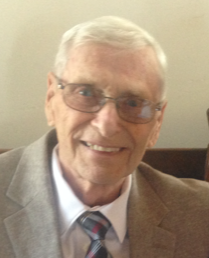 All services will be private due to the Covid-19 restrictions

REID, Douglas Ivan passed away peacefully with his loving wife Peggy of 67 years by his side at Cedarwood Village in his 89th year after a courageous battle with pulmonary fibrosis.  Cherished father and father-in-law of Patsy and Paul Dorish, Judy and Robert Whitenect, Donna Jean (predeceased) and Ray (Liz) Giles, Jenn and Rick Topp.  Proud grandfather of Mike and Kelli, Tom and Leslie, Kyle, Joel and Ashley and Abi and Tagir.  Great-grandfather of Kaia.  Dearly loved brother and brother-in-law of Jean Lowe and Bonnie and Gord Wilson.  Doug will be missed by his many nieces and nephews and extended family.  Predeceased by his parents Ivan and Bobby, Great-grandson Hunter Dorish, sister Donna Ivey and husband John and brother-in-law Sonny Lowe.  Doug was an active member for many years in the Port Dover Community.  He was a dedicated member of the 56th Field Battery in Simcoe.  Doug worked as a butcher for his entire career.  He was employed by many of the area grocery stores over the years and also was owner/operator of Reid’s Meat Market.  Doug was an elder of Grace United Church and member of Port Dover Lions Club.  He was very active in Port Dover Minor Baseball and Hockey.  He played the trumpet in the Port Dover Band, which entertained people in many areas of Norfolk.  Doug was the life of the party, he loved telling jokes and being the entertainer.  He will be held in the hearts of all who loved and knew him.  Due to the Covid-19 restrictions all services will be private.  Arrangements have been entrusted to Thompson Waters Funeral Home, Port Dover 519 583-1530.  For those wishing, donations to Camp Trillium-Rainbow Lake or the Simcoe and District Humane Society would be greatly appreciated.  Online donations and/or condolences can be made at www.thompsonwatersfuneralhome.com.

Share Your Memory of
Douglas
Upload Your Memory View All Memories
Be the first to upload a memory!
Share A Memory