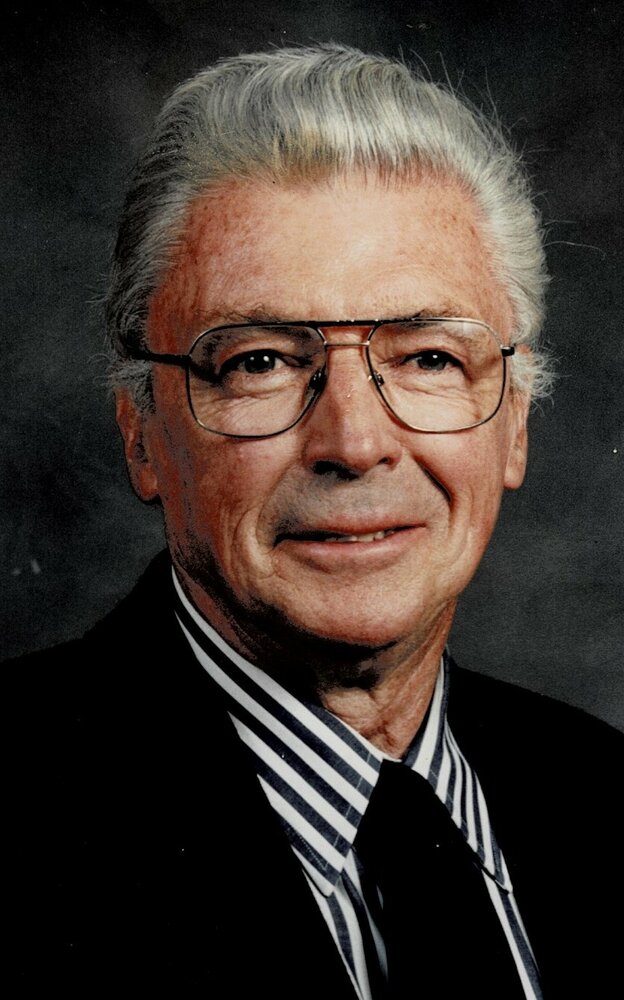 Cruise, James Edwin June, 26, 1925 – November 27, 2021 An interment and celebration of life will be held to honour the life of Jim Cruise. The interment will be Tuesday, July 26 at 11 am at Oakwood Cemetery, Simcoe, followed by a celebration of life at Marburg Hall. Arrangements entrusted to Thompson Waters Funeral Home, 583-1530.

CRUISE, James Edwin (Jim), BA, MSc, PhD, LLD. of Cedarwood Village, Simcoe, peacefully on Saturday, November 27, at Norfolk General Hospital, in his 97th year. Son of the late William Edward Cruise (1970) and Annie Gertrude Walker Cruise (1964) of Marburg. Survived by nieces and nephews; Monte Smith and Wanda, Joan Smith, Pat Smith, all of Port Dover, Judy Brown of Hamilton, Sheila and Dave Chanda of Simcoe, Gary and Carol Cruise of Kingston, Jim and Connie Dickey of Oro-Medonte, Richard Merritt of Niagara-on-the-Lake, Rob and Pat Dodd of Port Rowan, best friend Carol-Le Stewart of Townsend, and their families. He was predeceased by his sisters Eleanor Smith (2014) and Isabel Powell (2021), brother George Cruise (1991), sister-in-law Ruth (Meade) Cruise (2011), and by brothers-in-law Allan Smith (1976) and George Powell (1989), also by nieces and nephews Stephen Cruise (1953), Douglas Bridgwater (1983), Michelle Cruise (1990), Jane Cruise (1997), Robin Lockyer (2005), Jere Smith (2006), Ruth Dodd (2007), Dr. Nancy Merritt (2018), Ted Brown (2019).  Jim served overseas as an Air Navigator in the RCAF during WWII and retired from active service in 1946 with the rank of Flying Officer. He then enrolled at Victoria College of the University of Toronto and later at Cornell University where he earned MSc and PhD degrees. He then taught for a number of years in Trenton before returning to Toronto as Professor of Botany at the University of Toronto and later as Associate Dean of the Faculty of Arts & Science. In 1975 he was appointed as the ninth Director (CEO) of the Royal Ontario Museum, a position he held for ten years.  During his tenure at the ROM major capital projects were completed, and her Majesty Queen Elizabeth II and Prince Philip were entertained.  In 1982, he was awarded an Honourary Doctor of Laws and Letters by the University of Guelph and in 1997 he was awarded the Queen's Silver Jubilee Medal. After retiring, Jim returned to Marburg in Norfolk County where he became involved in a number of volunteer activities and turned the family farm into a horticultural showplace where for years busloads of visitors were welcomed to tour the gardens and grounds. He served on the Board of the Lighthouse Festival Theatre and had terms as chair of Dover Mills Heritage Association, the Norfolk Historical Society and the Port Dover & Woodhouse Horticultural Society. For a number of years he served as Chair of the Official Board of Grace United Church. He was honoured in 2005 for long-time volunteer service by both the Ontario Heritage Foundation and the Ontario Horticultural Association and in 2006 he received the Silver Fir Award, the highest honour of the Ontario Horticultural Association. In 2008, Jim was made a Paul Harris Fellow of Rotary International. He was also a proud member of the Royal Canadian Legion, Branch 158 in Port Dover. In 2013 he was awarded the title of "Honourary Master Gardener" by the Master Gardeners of Ontario, and in 2015 he was made an Honourary Life Member of the Norfolk Historical Society. Friends are invited to remember Jim at the Thompson Waters Funeral Home, 102 First Ave., Port Dover  519-583-1530 on Wednesday, December 1, 2021 from 11 am to 1 pm. The Funeral Service will be held at Grace United Church, Chapman and St. George Streets in Port Dover at 2 pm on Wednesday, December 1, 2021 with the Reverend Kathryn Vance officiating. Proof of vaccine and identification will be required at the funeral home and the church. The service will be live streamed at http://bit.ly/graceunitedlive. Cremation will follow, with interment of the ashes in the family plot in Oakwood Cemetery at a later date. Memorial donations to Grace United Church, the Port Dover Foundation, or the Charity of your choice will be gratefully acknowledged by the family. On-line donations and/or condolences can be made at www.thompsonwatersfuneralhome.ca

Share Your Memory of
James
Upload Your Memory View All Memories
Be the first to upload a memory!
Share A Memory