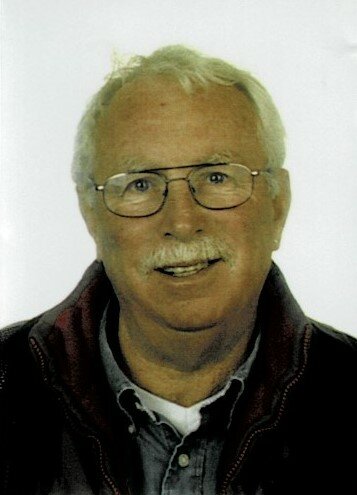 MURPHY James ("Jim") Albert Leighton, peacefully left the people and community he loved on November 12, 2022, after an amazingly strong struggle against the final victor, Lewy Body Dementia. Jim was born to Florence and Lesley Murphy on January 20, 1939, in the nursing home that no longer exists on Main Street in Port Dover. His early years were spent in Port Dover and Port Burwell, following his father's commercial fishing vocation.  At his father's death when Jim was only 12, the family returned permanently to Port Dover. Jim is mourned by his wife Catherine ("Katie") Buck; his son James William Murphy (Aileen), daughter Hayley Finlay and granddaughters Autumn and Everlee; his stepson Dean Brooks (Saiful); stepson James Brooks; brother John Murphy (Joan); sister Mary Ellen DuPon; sister-in-law Rosemary Murphy; grandson Shane Pinkerton; great grandson Lucas Pinkerton; granddaughter Jessica Pinkerton Murphy; granddaughter Acadia Brooks and grandson Ryder Brooks. Jim was a wonderful grandfather and uncle to his eleven nieces and nephews, all of whom will remember him with love.  He was predeceased by his parents and his brother Leslie Murphy. Jim spent his career in the Ministry of Natural Resources as a fisheries research technician who made all things possible, and eventually as manager of the research station in Port Dover.  His second "career" was as a 30 year volunteer with the Port Dover Fire Department, followed by his third "career" as a volunteer and often instigator of many Port Dover endeavours, including in his passion for the harbour area and marine heritage, his work for 20 years with the Harbour Museum; as a founding member of the Port Dover Waterfront Preservation Association; making Riverfront Park a reality with Ed Laevens; his early idea for  a river walk, service on the Port Dover Harbour Marina Advisory Committee,  and his concern about preservation of the lighthouse and Silver Lake with the dam. He was president of S.O.S. (Save Our Shipwrecks); was an early proponent of the Fishermen's Exhibition, and for years was the voice of the boat parade on July 1st, bringing the event to life with his commentary.  In his passion for Port Dover's cultural heritage, he planted memorial cherry trees at the entrances to town to replace the Kobayashi trees that had such history; rejuvenated the Main Street memorial anchors; and was actively involved with the Board of Trade and Port Dover Enhancement Association. Although he became a Citizen of the Year in 2007 for all his contributions, he always was careful to point out that many other volunteers were involved. There will be visitation for Jim at Thompson-Waters Funeral home on Friday November 25, from 2-4 P.M. and 7-9 P.M., and a funeral service at Grace United Church on Saturday, November 26 at 12 P.M. followed by interment in Port Dover cemetery and a celebration of his life at the Community Centre. For anyone wishing to remember Jim in a way that would be meaningful to him, please consider donations to the Port Dover Harbour Museum, the Port Dover Waterfront Preservation Association, the smile.Port Dover Lions Club, the Port Dover Foundation, or the Port Dover Board of Trade.  Jim's family always will remember the extraordinary personal care he received from the caregivers at Dover Cliffs, not only from those attending him but also the behind the scenes people who keep everyone well fed, in well kept clothes and clean beds in a well maintained atmosphere. Jim and Katie were made to feel like part of a family there. Special thanks go to Lesley Blenkhorn, who for Jim's time at Dover Cliffs provided additional individual care for him that went "above and beyond" and made a real difference in the quality of his life.Jim had a colorful life well lived in the community and with the people who meant so much to him.People often smiled when they spoke of Jim, and he would want to continue to be remembered with a smile.

Share Your Memory of
Jim
Upload Your Memory View All Memories
Be the first to upload a memory!
Share A Memory